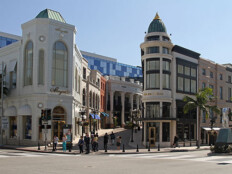 The signs driving into Beverly Hills will forever be associated with the greatest shopping and dining experiences in the world; where wealth and power are secondary only to beauty and sophistication.  Delicately embraced by the business-end of everything entertainment, Beverly Hills is the epitome of lavish excellence that propels it beyond its world-renowned zip code.  Swimming pools, granite foyers are minute examples of a sense of style that can only be described as the original.  Despite what you may think you know about Beverly Hills and its palm-lined streets being the outdoor shopping center for the wealthy, 90210, 90211 and 90212 are 90% residential neighborhoods.

Rodeo Drive and the Beverly Hills Oil Field are only sideshow attractions in the living circus of gold fixtures and living splendor that is Beverly Hills.

Bel Air is situated about 12 miles west of Downtown Los Angeles and includes some of the foothills of the Santa Monica Mountains.  Residences range from relatively modest ranch-style houses, to large mansions. In general, the higher up the mountain, the smaller the building lots, and more modest the houses. Multi-family housing is not permitted and ordinances regarding architectural styles and lot sizes help to preserve the area.  It lies across Sunset Boulevard from the northern edge of the main campus of the University of California, Los Angeles. At the heart of the community sits the Bel-Air Country Club and the Hotel Bel-Air, and Stone Canyon Reservoir lies in the northeastern part of the community with spectacular nature views. 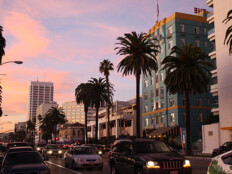 Santa Monica is a beachfront city in western Los Angeles County, California, United States. The city is named after the Christian saint, Monica. Situated on Santa Monica Bay, it is bordered on three sides by the city of Los Angeles – Pacific Palisades to the north, Brentwood on the northeast, Sawtelle on the east, Mar Vista on the southeast, and Venice on the south. Santa Monica is well known for its affluent single-family neighborhoods but also has many neighborhoods consisting primarily of condominiums and apartments. Over two-thirds of Santa Monica’s residents are renters. The Census Bureau population for Santa Monica in 2010 was 89,736.

Partly because of its agreeable climate, Santa Monica had become a famed resort town by the early 20th century. The city has experienced a boom since the late 1980s through the revitalization of its downtown core, significant job growth and increased tourism. The Santa Monica Pier remains a popular and iconic destination. 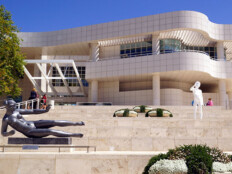 The district is located at the base of the Santa Monica Mountains, bounded by the San Diego Freeway on the east, Wilshire Boulevard on the south, the Santa Monica city limits on the southwest, the border of Topanga State Park on the west and Mulholland Drive along the ridgeline of the mountains on the north.

As a member of a group of nearby neighborhoods that are affluent, it is known as one of the “Three Bs”, along with Beverly Hills and Bel Air. A view of Wilshire Boulevard westbound, toward the ocean. Brentwood begins on the right-hand side of the street. Brentwood, like nearby Santa Monica, has a temperate climate influenced by marine breezes off the Pacific Ocean. Residents frequently wake to a “marine layer,” a cover of clouds brought in at night which burns off by mid-morning. The topography is generally split into two characters, broadly divided by Sunset Boulevard: the area north of Sunset is defined by ridges and canyons of the Santa Monica Mountains; south of Sunset the area is hilly. The southern district features underground springs which bubble up into a small creek along “the Gully” near the Brentwood Country Club, and in the “Indian Springs” portion of the University High School campus, formerly the site of a Native American Tongva village. 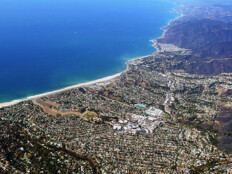 Pacific Palisades is a neighborhood and district within Los Angeles, located among Brentwood to the east, Malibu and Topanga to the west, Santa Monica to the southeast, the Santa Monica Bay to the southwest, and the Santa Monica Mountains to the north. It is primarily a residential area, with a mixture of large private homes, small (usually older) houses, condominiums, and apartments. The district also includes some large parklands and many hiking trails. The Pacific Palisades is known as “Where The Mountains Meet the Sea” and is home to numerous Hollywood celebrities and luminaries. 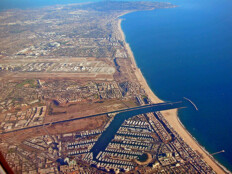 Marina del Rey is a seaside unincorporated area. Its Fisherman’s Village offers a view of Marina del Rey’s dominant feature as it is the world’s largest man-made small craft harbor, with 19 marinas with capacity for 5,300 boats and is home port to approximately 6500 boats. The marina itself, a specially designed harbor with moorings for pleasure craft and small boats, is surrounded by high-rise condos, hotels, apartments, shops, and restaurants. 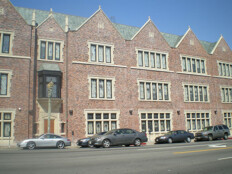 This is one tiny and adorable nabe. Forgoing apartment housing in favor of mega-cute bungalows, Beverlywood is quite the gem. Residents seem to stick around for a while after they move in, a trend that’s fostered a strong community throughout the years. If you move here, take heed of the covenants the Beverlywood Homes Association has in place. The Association has a reputation for being one of the strongest in the city, having successfully fought off the city’s attempt to rezone housing as commercial real estate. This is likely why this nabe is so darn snuggly though. 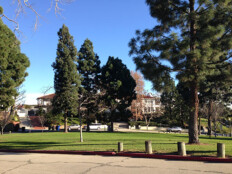 Cheviot Hills is a small residential district on the West Side of Los Angeles. Situated within a short drive of both Fox Studios and Sony Studios, the neighborhood has often been the site for the filming of motion pictures and television shows. Nearby UCLA offers many cultural and sporting events for the community as well as opportunities for continuing education. 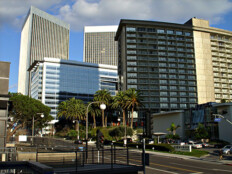 Century City is a commercial and residential district. It is an important business center, and many law firms and executives—particularly those with ties to the film, television, and music industries—have offices there. It is bounded by Westwood on the west, Rancho Park on the southwest, Cheviot Hills and Beverlywood on the southeast, and the city of Beverly Hills on the northeast. Its gleaming high-rises stand in stark contrast to the small apartment buildings and single-family detached homes in the lower-density neighborhoods surrounding. 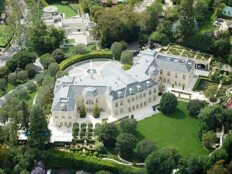 Holmby Hills is an affluent neighborhood in the district of Westwood in western Los Angeles. Sunset Boulevard is the area’s principal thoroughfare which divides Holmby Hills into north and south sections. However, Holmby Hills can be recognized by its unique street lamps. Many high-level entertainment industry executives, such as Interscope Records founder Jimmy Iovine, television producer Aaron Spelling, movie mogul Ray Stark, and Playboy founder Hugh Hefner (whose home is better known as the Playboy Mansion) currently reside or have previously resided in the area. 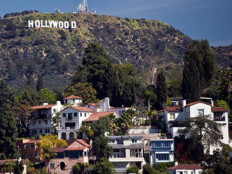 Boasting one of the most desirable locations in all of America, the Hollywood Hills are perched above Hollywood and West Hollywood. The Hollywood Hills are in a perfect location to offer short drives to any of the highly prestigious universities of Los Angeles, including UCLA, USC, and Pepperdine University. There a number of beautiful communities in the Hills, some of which are Beachwood Canyon, Bronson Canyon, Hollywood Heights, Laurel Canyon, Mount Olympus, Runyon Canyon, Sunset Hills, and Whitley Heights. With very few condominiums and apartment buildings, most of the real estate in the Hollywood Hills is beautiful homes with sweeping views of the city they face. The winning characteristics of this city have made this one of the best places for Hollywood’s celebrities to buy a home. 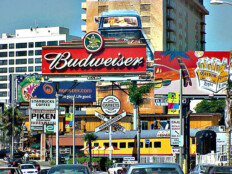 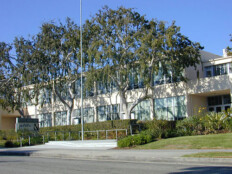 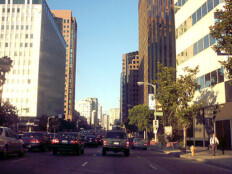 A center of movie-going on the Westside and the site of many movie premieres, Westwood is home to several vintage movie theaters. Single-family homes tend to be east and southeast of UCLA. Housing in the portion of the district bounded by Sepulveda, Santa Monica, Westwood, and Wilshire Boulevards is mostly low- or medium-rise apartment buildings catering to upscale young professionals, as well as some UCLA students. Most UCLA students in Westwood, however, live in the hilly area of low-rise apartments. The winding two-mile section of Wilshire Boulevard to the east of Westwood Village is dominated by residential high-rises, and is variously known as the Millionaire’s Mile. 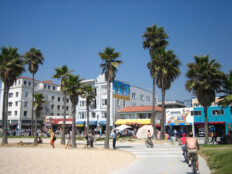 Venice is a beachfront district on the Westside of Los Angeles. It is known for its canals, beaches and circus-like Ocean Front Walk, a two-and-a-half mile pedestrian-only promenade that features performers, fortune-tellers, artists, and vendors. Venice was home to some of Los Angeles’ early beat poets and artists and has served as an important cultural center of the city. Many of Venice’s houses have their principal entries from pedestrian-only streets, and have house numbers on these footpaths. Venice is today one of the most vibrant and eclectic areas in Los Angeles and it continues a tradition of liberal social change. 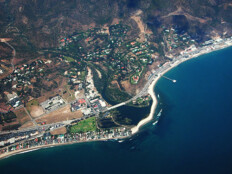 Most Malibu residents live within a few hundred yards of Pacific Coast Highway, which traverses the city, with some residents living up to a mile away from the beach up narrow canyons, and many more residents of the unincorporated canyon areas identifying Malibu as their hometown. Malibu has been used as a location or setting for many films, television programs and music videos. Nicknamed “the ‘Bu” by surfers and locals, the community is famous for its warm, sandy beaches, and for being the home of many Hollywood movie stars and others associated with the entertainment industry. Signs around the city proclaim “27 miles of scenic beauty”, referring to Malibu’s original length of 27 miles before the city was incorporated in 1991.